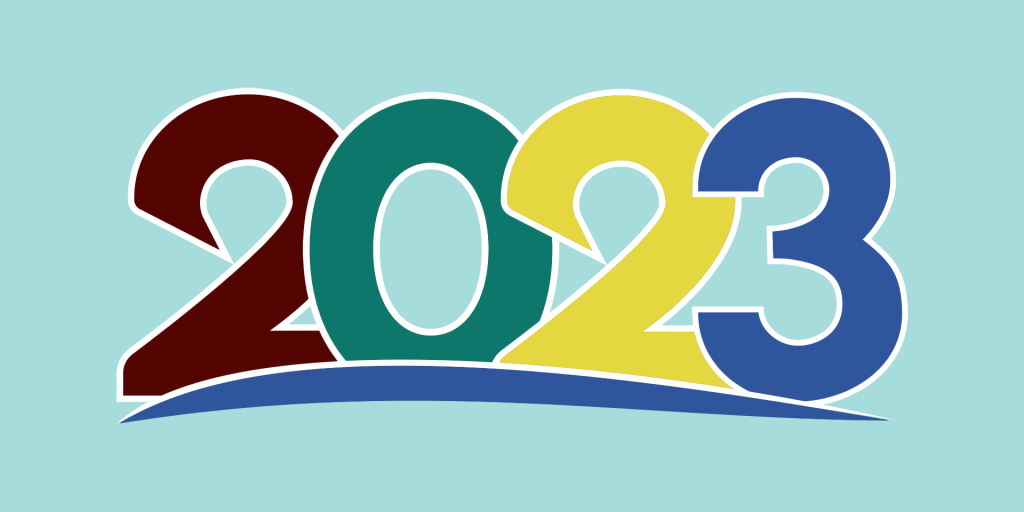 As ever, the end of the festive season lands with a bumpy blend of melancholy and excitement; sadness for the cessation of regular cheese binges, overly-regular wine and, in my case, the glorious return of the post-lunch nap, but excited to embark upon another twelve months of the wonder that is being alive. So,it’s time to remove the oversized woollen Christmas jumper of weight gain; pull on the shorts of intent, slip the trainers of motivation on to your feet and head out of January’s front door to hit the streets of 2023. I’m not sure they’re going to paved with gold but at least may they not be strewn with the dog mess, fag ends, spent gas canisters and discarded energy drinks cans of the past three years.

It’s got to be better this time around, hasn’t it?

No one can remember what happened last Monday (I think I went for a walk and it didn’t rain but that could have just been a brie-dream) so let’s just agree that the week began on Tuesday. And what did the first working day of the year bring? What was written on the virgin blank page of the new year? Well, bless my soul if it wasn’t everyone’s favourite combo: strikes and Prince Harry. Fantastic. Oh and the news that the UK is likely to have a deeper and longer recession than any other G7 country. Cheers!

I’ve got nothing of use to say on the strikes except that I hope that an agreement is reached soon and fans of sarcasm about the royal family will have to wait a few paragraphs for their fix this week because Tuesday’s headlines “I want my father and brother back” which in more rational times would be notable have rather been eclipsed by what’s wrapped around the nation’s papers this Friday morning. But patience, we’ll get there. Sadly.

For obvious reasons there were a lot of health stories kicking around the papers at the start of the week. Allow me to alight on two of them briefly. Firstly, the Daily Mail stunned the nation with the revelation that drinking water might actually be good for you. I know, I was knocked sidewise by this too. Next they’ll be saying that fifteen pints of Stella every night might be disadvantageous for your health. Sniping aside, the story quoted some US research that suggests that drinking eight glasses of water a day could prolong your life for eight years. Which has got to be worth a go right? Oh, but a caveat. Don’t drink too much water because you can get hyponatraemia, a condition in which your cells inflate often with fatal consequences. This is how kung fu legend Bruce Lee died. It really is the strangest article.

The Daily Star’s health reporting took a slightly different tack on Tuesday with the front page headline “Pine Dining” (nice) accompanying a story in which “top chefs” have said that we shouldn’t be throwing away our Christmas trees but in fact EATING THEM. “You can pretty much eat the whole thing,” says Julia Georgallis. CAVEAT – Georgallis is the author of a book called “How to Eat your Christmas Tree” which suggests that her position on pine-munching might not be entirely balanced. But if fir ice-cream is your thing then I wish you a delicious weekend ahead.

Politics woke from its Christmas slumbers this week with speeches from the Prime Minister and the Leader of the Opposition on subsequent days but both having booked the same East London tech campus as the venue. Starmer was quick to clarify that Labour had booked it first.  Sunak’s speech (and I have to say his oratorial style lacks some Churchillian flare to say the least; more than one commentator likens it to a chat bot or smart speaker – I’m not commenting) was to tell everyone his FIVE big promises for the year ahead. So whereas most of us are starting the year with promises of less cheese, more jogs, better books and more interesting haircuts, Sunak promised to cut NHS waiting times, bring down inflation, grow the economy, reduce national debt and pass new laws to stop small boats of migrants crossing the channel (and of course nothing stops a small boat of desperate people like legislation).

All of which seems fine and dandy and largely very sensible. But after a moment’s thought, one might be forgiven for asking if Sunak’s list is simply what we’d expect every government to be doing anyway? Is this the political equivalent of Heinz announcing that it plans to sell a lot of Baked Beans in 2023?; or that The All England Club is promising to stage a tournament  in early July in which really good tennis players compete to find the best among them at playing tennis and then win a lovely trophy?; or a BBC weather reporter looking solemnly down the camera lens and telling us that “this year, I can guarantee you rain”.

Okay then, just before we down tools for the weekend let’s spend a few moments talking about Prince Harry. His book “Spare” (genuinely smart title) is published next Tuesday but miraculously, all of the papers seem to have seen an advance copy. No idea how this has happened. Anyway, the headlines this morning are wall-to-wall Harry: “Harry spills his secrets in devastating memoir”; UK Monarchy facing its worst crisis for 30 years”; “Harry: I did coke and weed”; “You sold your soul Harry” . . . .  etc etc.

People are interested. People must be interested otherwise none of this would be happening. But do I need to know how Harry lost his virginity? Or how many Taliban fighters he killed? How he had a punch-up with his brother?  Or what he thinks of Camilla? I really, really don’t. But I concede I may be in a minority. To me the whole thing just reeks of sadness.

Oh goodness, that’s the word count reached. Quickly then, if you’re a Disney+ subscriber then I urge you to watch “The Bear” some of the best television I’ve seen of late. Plus there’s both REM and Radiohead on the soundtrack, so what else do you need?

I genuinely wish you a brilliant year ahead. I’ll try to write as many Friday Speed Reads as I can (unless anyone tells me to stop) and if you’ve read this far then thank you. As ever, it’s impossible to predict what will befall us in the next twelve months but I guess that’s part of the fun. So enjoy it. Thrive.

To play out, there aren’t many great “new year” songs so let me recommend this. I’d not heard of this artist before but I stumbled on it on YouTube and it’s absolutely captivating. Rewards patience and maybe listening to in the bath with a dry-January-compliant glass of Ribena.